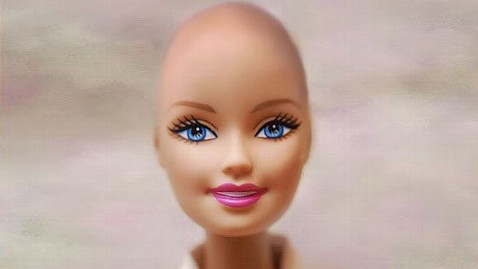 Since the 50s Barbie has been the epitome of beauty for young girls around the globe. With her blue eyes, pearly whites and perfect boyfriend Ken, girls want to be her and men want to be with her.

Last week saw calls for Barbie to continue her status as a role model and shed the one thing she’s most famous for – her voluminous blonde tresses. In 2012 appeals are being made for Barbie to be bold and become bald. A new Facebook campaign is petitioning to Mattel – the makers of Barbie – to create and sell a ‘Beautiful and Bald Barbie’, complete with head accessories such as wigs, head wraps and hats.

The aim of the campaign is to strip Barbie of her iconic hairstyle and reinvent her as a role model for women, particularly young girls, who suffer from hair loss.

For children who are having trouble coping with their own or a family member’s hair loss, a hairless Barbie could be a reminder of the sentiment that bald is still beautiful. Accessories such as wigs, bandanas, scarves and hats could be included. This would be a great coping mechanism for young girls dealing with hair loss themselves or a loved one.

We would love to see a portion of proceeds go to childhood cancer research and treatment. Let’s get Mattel’s attention! Emails can be directed to baldbarbie@gmail.com.

Although here at Farjo we work to combat hair loss through transplant surgery, I personally think this is a fantastic campaign. Of course a hair transplant is the best, long term option for fighting hair loss but for some, such as those suffering from Alopecia Areata or Alopecia Totalis, this simply isn’t a viable option.

The Bald Barbie campaign is ultimately raising awareness about the much forgotten fact that hair restoration surgery is not just an aesthetic procedure, but a solution for what can be an emotionally distressing and extremely harrowing time for balding men, women and children.